Posted/Updated on March 23, 2012
by Trawel India
Yugadi or Ugadi or "Samvatsradi" (Telugu: ఉగాది, Ugadi or సంవత్సరాది:samvatsradi), Konkani/Marathi: युगादी yugadi, Kannada: ಯುಗಾದಿ, yugadi, IPA: [jugadi] is the New Year's Day for the people of the Deccan region of India. The name Yugadi or Ugadi is derived from the name "Yuga Adi", which means 'the beginning of a new age'. It falls on the different day every year because the Hindu calendar is a lunisolar calendar. The Saka calendar begins with the month of Chaitra (March–April) and Ugadi marks the first day of the new year. Chaitra is the first month in Panchanga which is the Indian calendar. 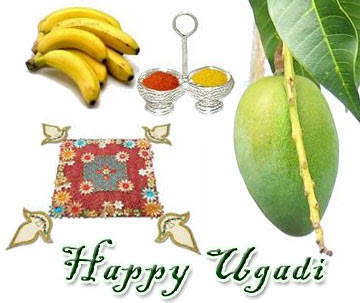 
Ugadi Pachadi is a special preparation prepared in every Andhra home on Telugu New Year’s day.Its made with fresh tamarind,jaggery(panela),fresh mangoes and neem flowers (margosa).One can add sugarcane,coconut and bananas also.The sweetness of jaggery,the sourness of tamarind,the bitterness of neemflower and the pungent flavor of the green mango skin,spice of the chilli powder ,raw tender mango’s taste and lastly salt form the shadhruchulu or six tastes of the sauce. 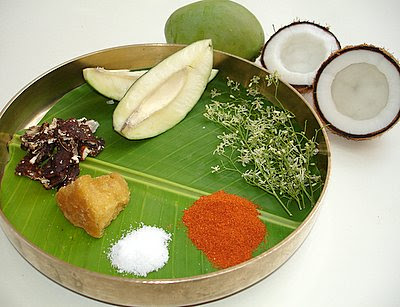 Mix all the above ingredients to form a sauce like appearence.If you want a thin and watery chutney add very little water (2-3 tbsps).
Note: You can also add small pieces of sugarcane,pieces of ripe banana,putanaala pappu(roasted channa dal) along with the above ingredients.
Each home has its own version of preparing the ugadi pachadi but the main ingredients (reflecting all the six flavors) are as specified above.

The myriad rich taste of this delicacy tickles and lingers on our tongue for a long time leaving a medley of flavors.The flavors of the Ugadi Pachadi signifies that the mixture of bitter margosa flowers and sweet jaggery reflect the myriad facets of life,both joy and sorrow and prepares one to face both good and bad in the year to come.During this season we find people eating neem leaves and flowers at the onset of Vasantha Ruthu and through out the spring season as its a counter measure for kapha dosha individuals (kapha dosha increases around this period).Ugadi Pachadi is a healthy low calorie pachadi where the Neem flowers , new tamarind, jaggery and fresh raw mangoes contain nutrients that cleanse the system and act as prophylactics(prevention of illness or disease). 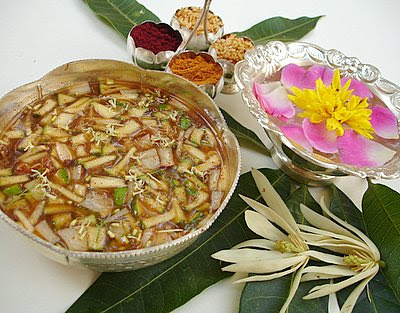 Ugadi Subhakankshulu!Wishing you all a very happy Ugadi and a great year ahead! 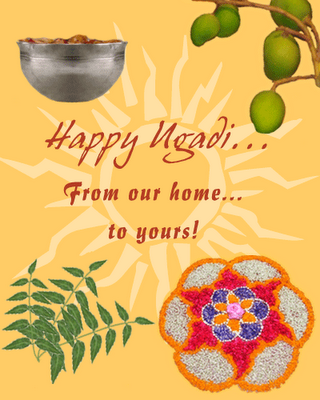 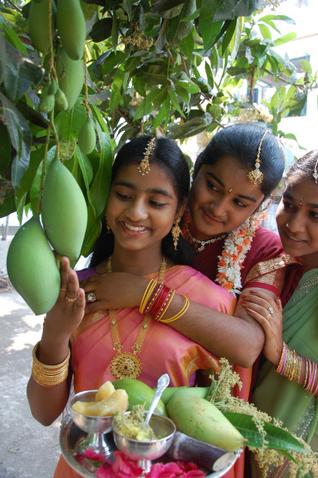 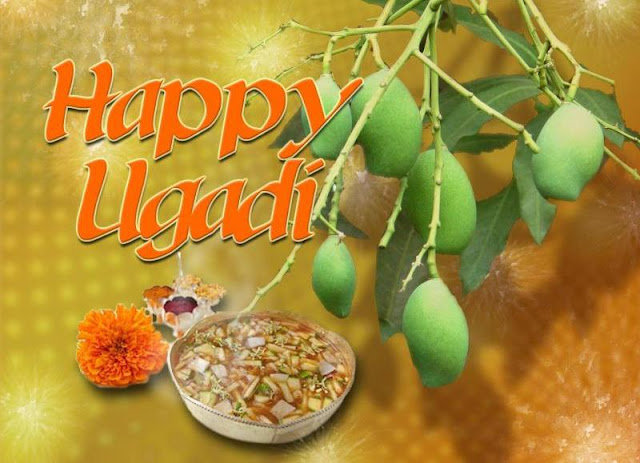