Inside the world's biggest private jet with 4-poster beds, Turkish bath... and a place to park the Rolls !

In a space normally given to 600 passengers, the owner and his guests will enjoy five-star treatment from the moment of arrival. After driving up to his plane, he will have the car parked in the onboard garage.

A lift drops to the tarmac and a red carpet unfurls, with downlights to 'give the impression of turning up at the Oscars', according to Design Q's co-founder Gary Doy. The belly of the A380 has been turned into a relaxation zone, including a Turkish bath lined with marble only two millimetres thick to keep the weight down.

Next door is a wellbeing room, with the floor and walls turned into a giant screen showing the ground down below. Guests can stand on a 'magic carpet' and watch the journey, a scented breeze blowing into the room.

The five suites which form the owner's private quarters have king- size beds, entertainment systems and a prayer room featuring computer generated prayer mats which always face Mecca . A lift shuttles between the plane's three floors, from the private quarters upstairs, down to the concert hall, featuring a baby grand piano and seating for ten, and to the garage below.

There are around 20 'sleepers' - the equivalent of First Class seats - for extra guests. According to the designers, the style is elegant curves and swirls of Arabic writing. 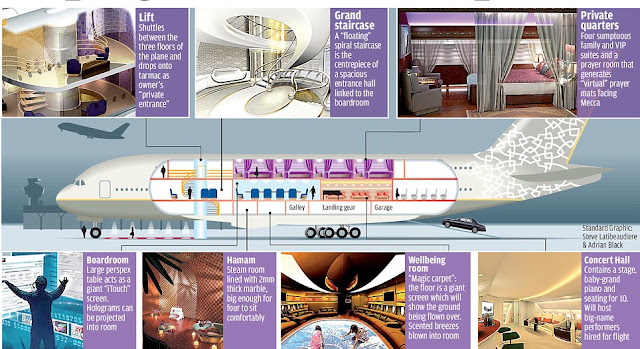 AND NOW THE LATEST NEWS !
Al-Waleed Spends $176 Million to Outfit His A380


After dropping close to $320 million on his new Airbus A380 jet, Prince Al-Waleed of Saudi Arabia is spending another $176 million on ultra-lavish modifications, including a $60 million gold leaf paintjob. An unnamed German company is customizing the interior of the plane to include:
A lounge to seat a traveling entourage of 25 trusted aides;
A marble-paneled dining room with seating for 14;
A bar with curtains to mimic tents of the Arabian Desert;
A fiber-optic mosaic that will depict a shifting desert scene;
A movie theatre with plush leather seats the color of sand dunes;
A series of bedrooms linked to stewardesses by intercom;
A gym with Nautilus equipment and running machines; and
A large silk bed designed to resemble a Bedouin tent that will be the centerpiece of the planeâ€™s interior.

Reports speak of the decor as being Lawrence of Arabia meets Star Wars. Al-Waleed's A380 will be completed in two years, and in the meantime he will cruise in his Boeing 747 Jumbo Jet.
By Trawel India a la/s February 03, 2012
Newer Post Older Post