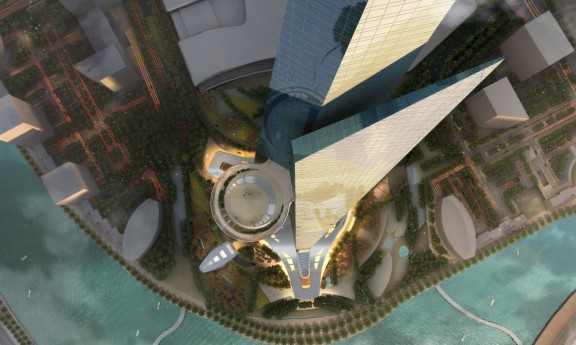 Adrian Smith + Gordon Gill Architecture designed The Kingdom Tower, to be the world’s tallest building about 1000+m, in Jeddah, Saudi Arabia, near the Red Sea.

Supertall building experts Adrian Smith + Gordon Gill are to complete the design for a stunning new tower to anchor the proposed $20bn Kingdom City masterplanning project in Jeddah, Saudi Arabia. The firm carefully quashed internet rumours that they were working on a ‘mile-high’ tower, yet did not deny involvement in the Kingdom Tower scheme. This morning His Royal Highness Prince Alwaleed Bin Talal Bin Abdulaziz Alsaud, nephew of Saudi Arabia’s King Abdullah and chairman of Kingdom Holding Company officially announced AS+GG as design architects of the project to awaiting media.

Reassuringly elegant for a tower of such epic proportions – the completed Kingdom Tower will soar at over 1000m (at least 173m taller than the Burj Khalifa which currently holds the title of the world’s tallest building) with a total construction area of 530,000 sq m – the structure is being touted as a new marker of Jeddah’s importance as a gateway to the city of Mecca and has been directly inspired by the folded fronds of a young desert plant. Adrian Smith details: “With its slender, subtly asymmetrical massing, the tower evokes a bundle of leaves shooting up from the ground – a burst of new life that heralds more growth all around it.”

Smith’s partner Gordon Gill continues: “The way the fronds sprout upward from the ground as a single form, then start separating from each other at the top, is an analogy of the new growth fused with technology.” The graceful needle is also designed to symbolise the city of Jeddah as an economic power and cultural leader, with a focus on the ‘strength and creative vision of its people’. 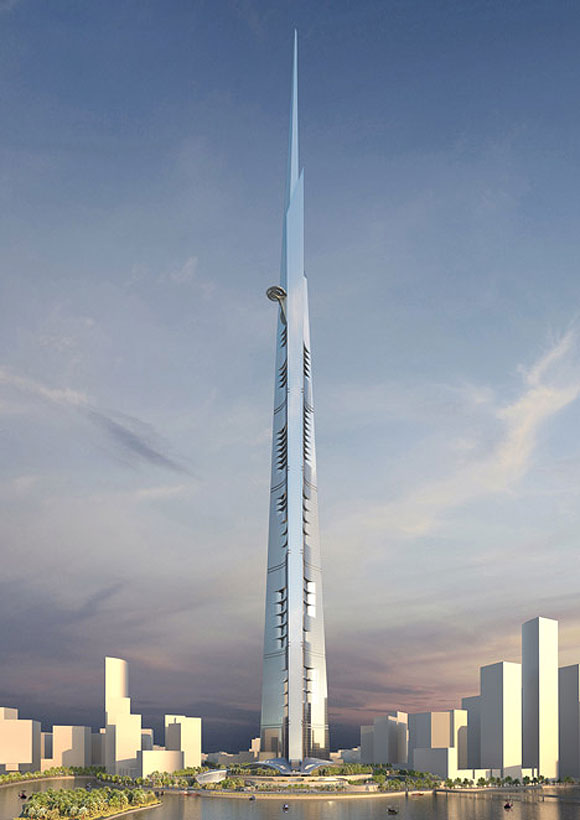 Aside from the initial ‘wow-factor’ of the building’s statistics, AS+GG have been applauded for their sensitive design aesthetic. Talal Al Maiman, Executive Director, Development and Domestic Investments, a Board member of Kingdom Holding Company and a board member of JEC commented: “Prince Alwaleed, Mr. Bakhsh, Mr. Sharbatly and I were impressed by the boldness and simplicity of the AS+GG design. Kingdom Tower’s height is remarkable, obviously, but the building’s iconic status will not depend solely on that aspect. Its form is brilliantly sculpted, making it quite simply one of the most beautiful buildings in the world of any height.”

Encased in the new spire’s glimmering façade will be a Four Seasons hotel, Four Seasons serviced apartments, Class A office Space, luxury condominiums and the world’s highest observatory. 59 elevators using the world’s most high-tech systems will be installed to provide ease of access, with 54 single-deck and 5 double-deck systems. The residential aspect has influenced the three-petal footprint of the design with tapering wings introducing an aerodynamic shape to reduce structural loading due to wind vortex shedding. All three sides of the Kingdom Tower sport a series of notches which form specifically engineered areas of shadow designed to fall on the outdoor terraces facing the city and Red Sea. 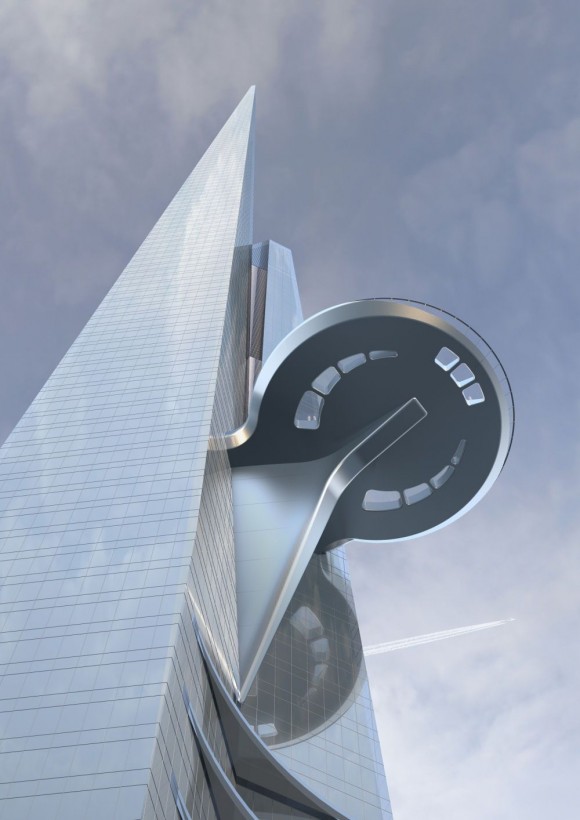 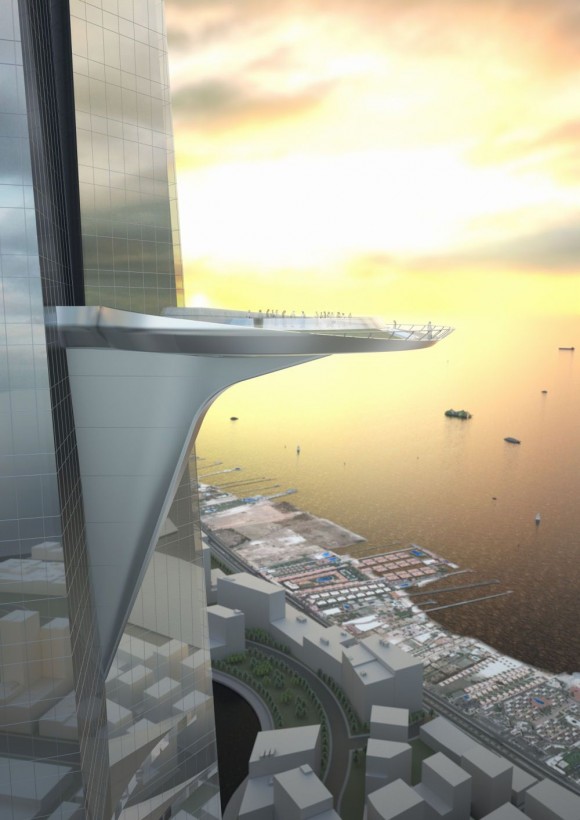 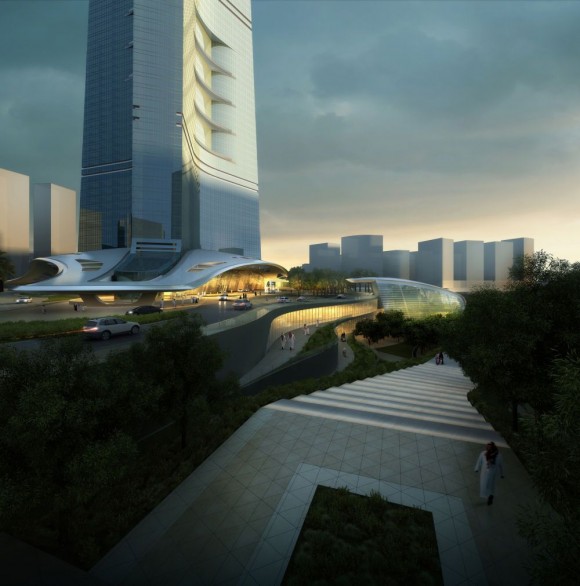 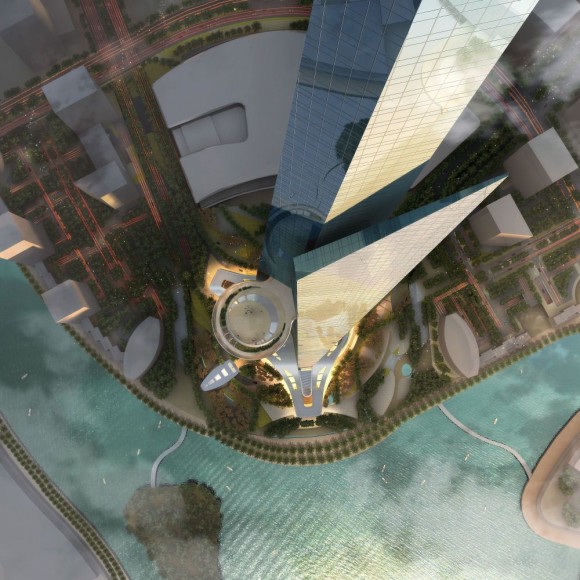