Posted/Updated on June 27, 2011
by Trawel India
Egypt - a country being in which you can not just plunge into the grand millennial history and mystery, but also get a lot of wonderful impressions of an unforgettable vacation. How? Each defines for himself. After all, Egypt is rich not only in their sights and antiquities. Tourists can choose from a large abundance of entertainment. Beach vacation, diving, go-karting, horse riding and camel riding, jeep tours in the desert, visits to museums, golf courses, the famous Egyptian shopping, restaurants, water rides. All this can be found in this ancient country. As the Seven Wonders of Egypt: the Nile, Red Sea, the Pyramids of Giza, Luxor, the temples at Abu Simbel, the ancient culture of the pharaohs and the Bedouins. 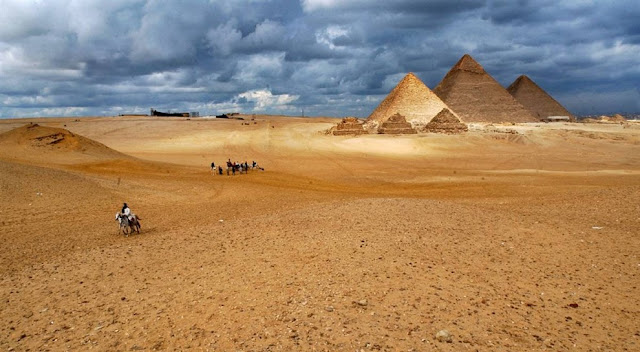 Tourists on horses and camels, visiting the historical monument - the pyramids of Giza, located not far from Cairo. The pyramids are the only one of the ancient seven wonders of the world that has survived to this day. In addition, they entered the list of new seven world wonders, drawn up in 2008. 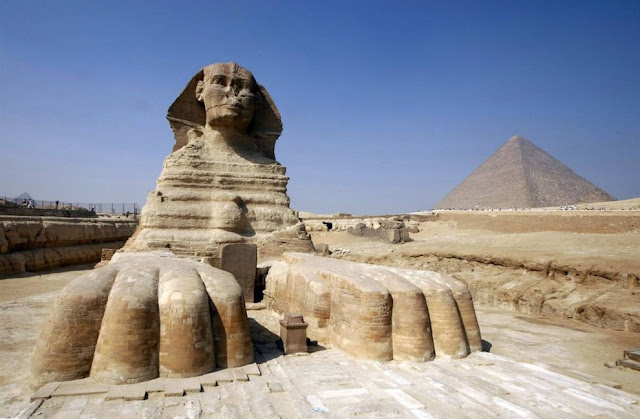 The Sphinx of Giza - a huge figure of the creature with the body of a lion and a human head is located on the west bank of the Nile near Cairo. The picture in the background we see the pyramid of Khufu. The Great Sphinx - is the biggest stone statue on the ground. Believed that it was created ancient Egyptians in the third millennium BC, between approximately 2520 and 2494 years. BC 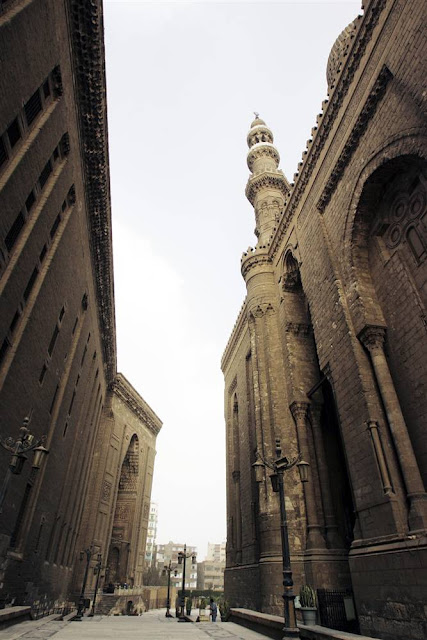 Attraction of Cairo - the ensemble of the mosque-madrasa of Sultan Hassan. The mosque was built between 1356 and 1363 years. AD during the reign of the Mamelukes. It is believed that the stones for its construction were taken from one of the great pyramids of Giza. 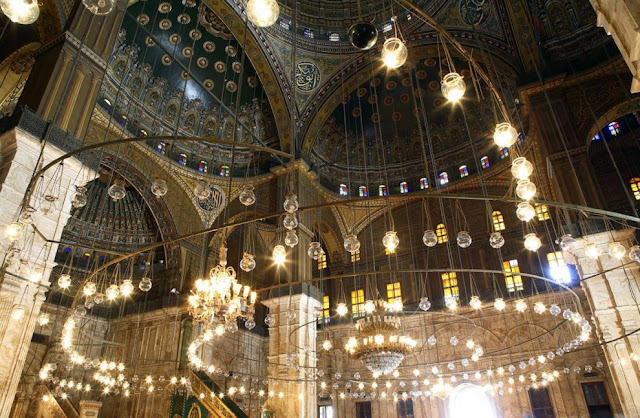 Mohamed Ali mosque is located in the citadel of Cairo and was built on his order between 1830 and 1848. This Turkish mosque has become the largest mosque built in the middle of the first 19. It was erected in honor of Tuzuna, son of Mohammed, who died in 1816. 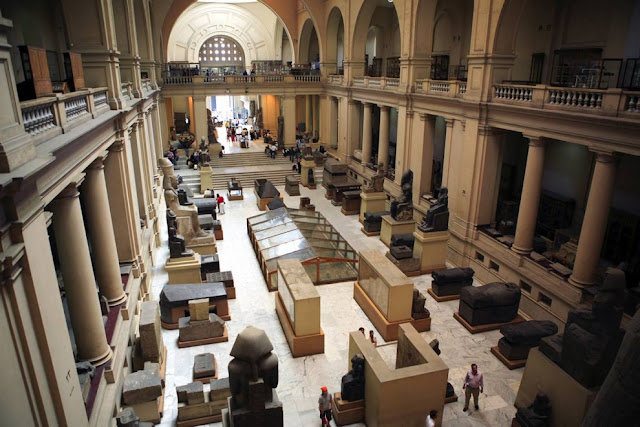 The Egyptian Museum, located in Cairo, which contains the largest collection of Egyptian antiquities. 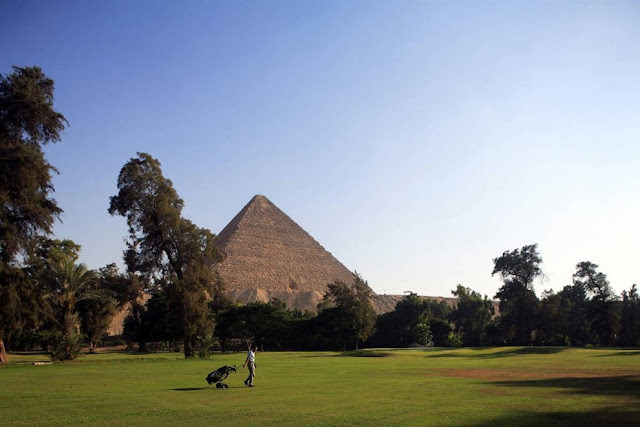 The golfer who plays on the field for the game of golf at the hotel «Oberoi House», overlooking the pyramids of Giza. 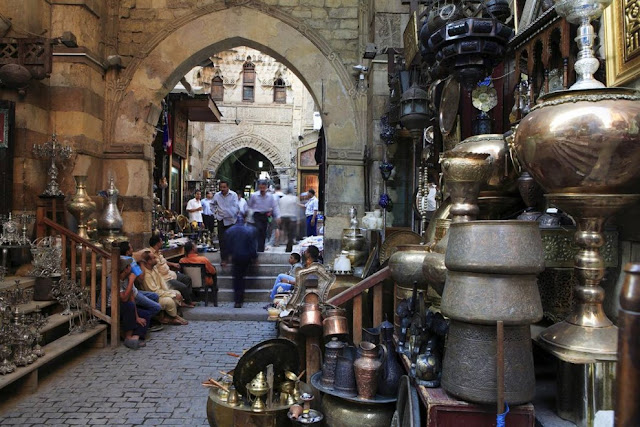 Khan al-Khalili is considered the biggest shopping area in Cairo. 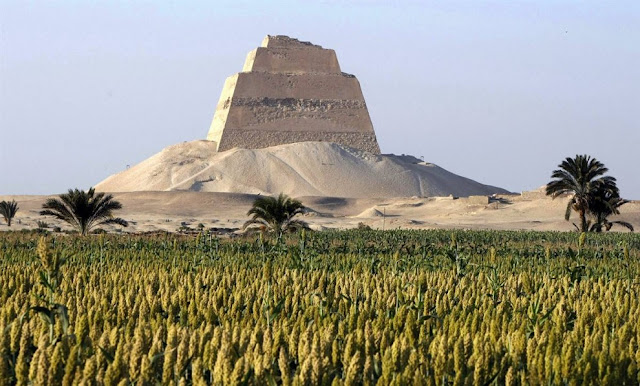 Pyramid Meyduma located on the edge of the desert 70 kilometers south of Cairo and is the first Egyptian pyramid with aboveground burial. Ancient Egyptians believed that the higher the buried person, the closer he becomes to the god of the sun. At the foot of the huge building covered with crumbling stones. 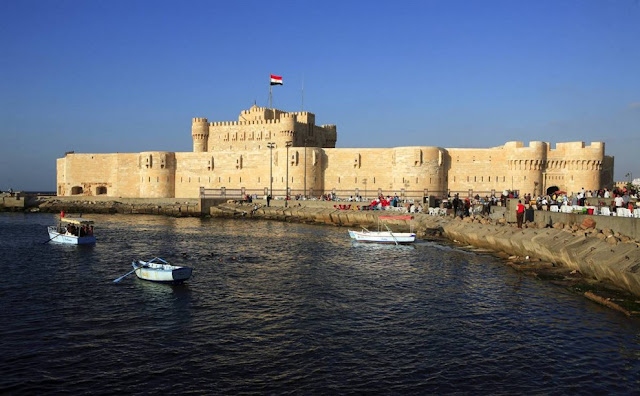 Fortress Kite beat the 15 th century building is situated on the Mediterranean coast of Alexandria. 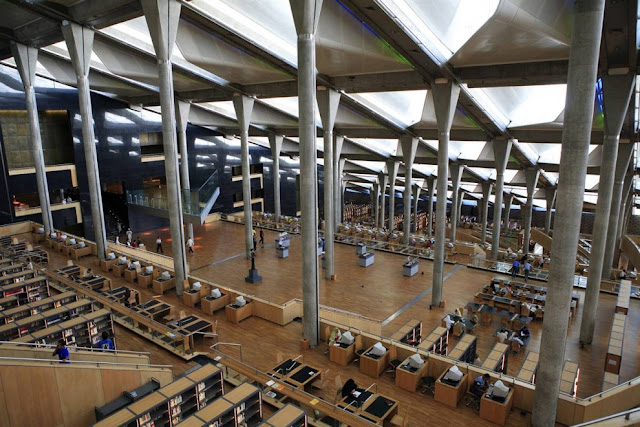 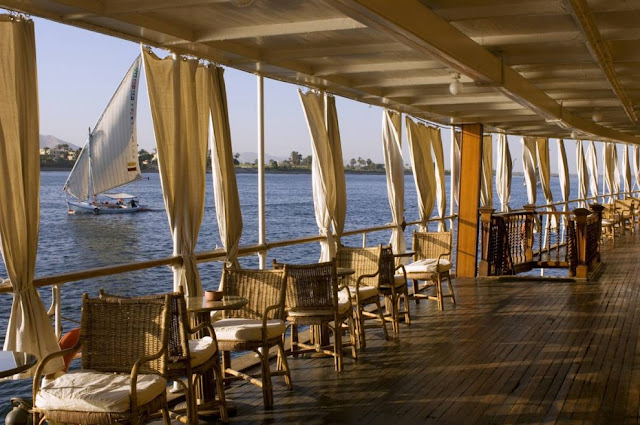 The steamer "Sudan" flies on the Nile River in the direction of the Egyptian city of Aswan. 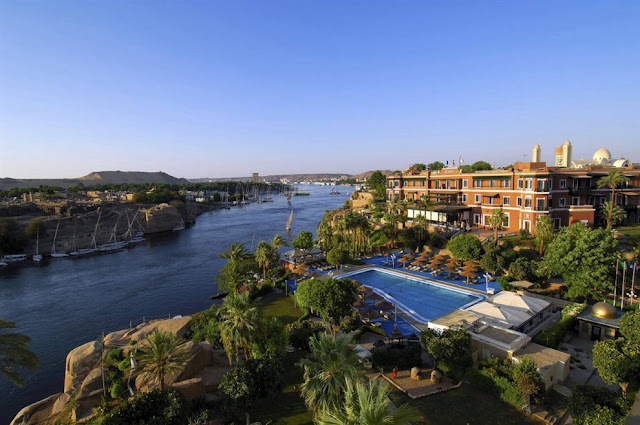 Hotel «The Old Cataract» (old threshold) in the city of Aswan situated on a hilltop, so the windows overlooking the River Nile. 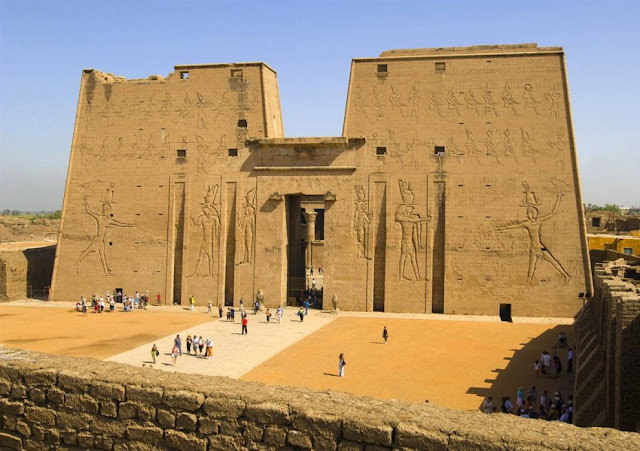 Temple of Horus in Edhu second largest temple in Egypt after the Temple of Karnak, and one of the best preserved. This temple is dedicated to mountain - God with the head of a falcon. 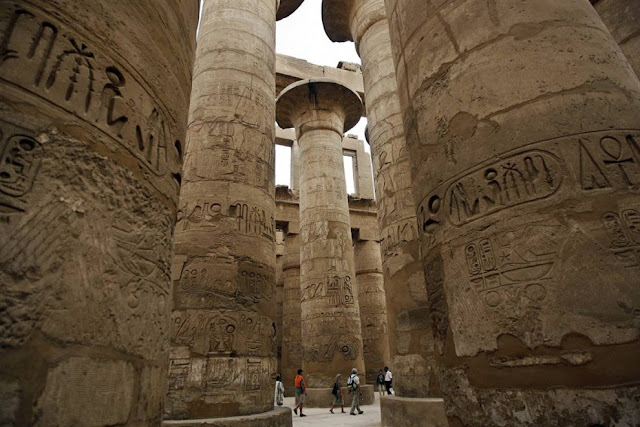 Tourists visiting the columns, decorated with hieroglyphs in Karnak temple in Luxor. Few sights can compare with the Egyptian Karnak complex in the greatness of columns, obelisks, stelae and decorated stones. 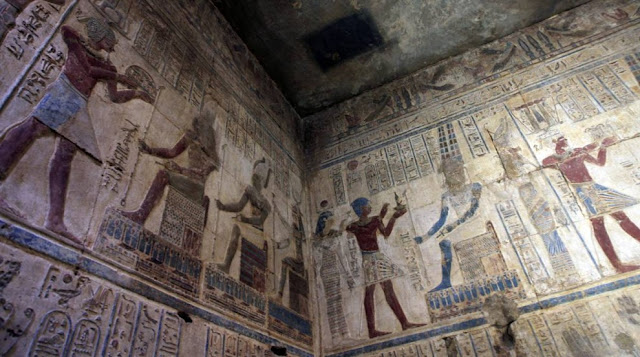 The walls of the Temple of Karnak in Luxor decorated with images of the pharaohs. During the 40 years the temple complex has been studied and restored the Franco-Egyptian team of archaeologists. 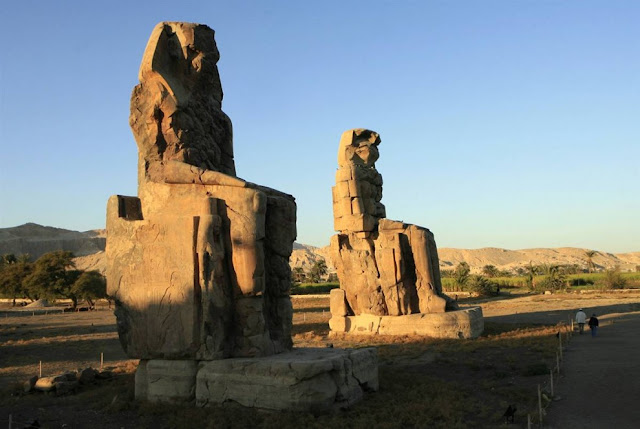 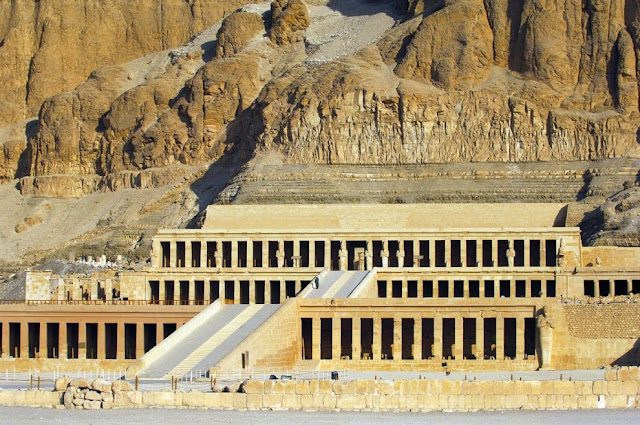 Temple of Queen Hatshepsut, located in Luxor, built of limestone. She became a 5-m pharaoh of the 18 th Dynasty of Ancient Egypt and the rules for longer than any other woman of the Egyptian dynasties. 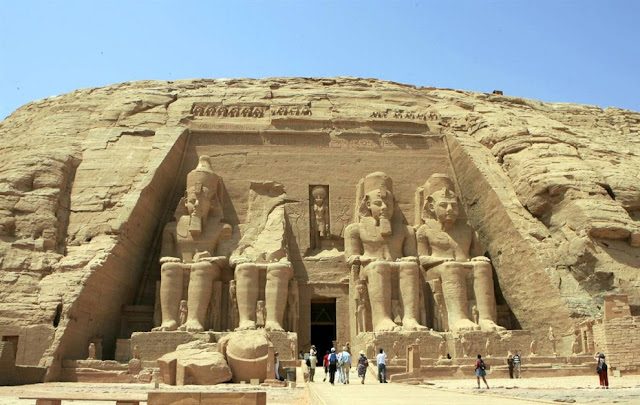 Temple of Abu Simbel was erected 20 years: from 1244 to 1224 years. BC Temple made by UNESCO's World Heritage List, is part of the Monuments of Nubia, which run from Abu Simbel to fillet (near Aswan). 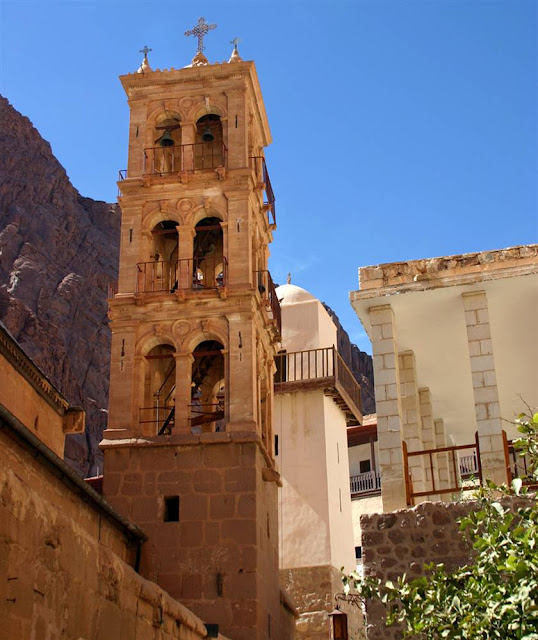 According to UNESCO, the monastery of St. Catherine is the oldest active Christian monastery in the world. 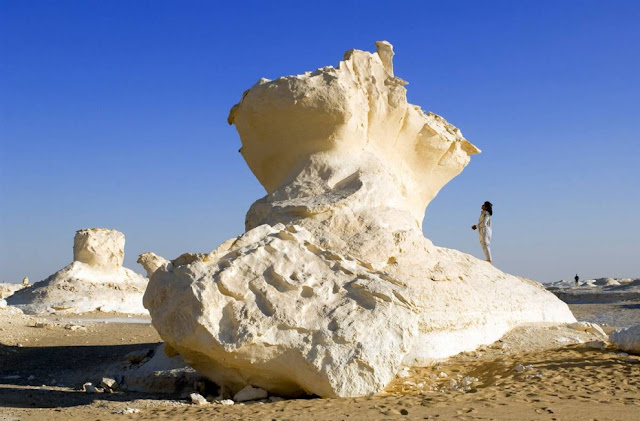 Tourist climbed on a huge limestone, formed as a result of sandstorms in the white desert, Egypt. 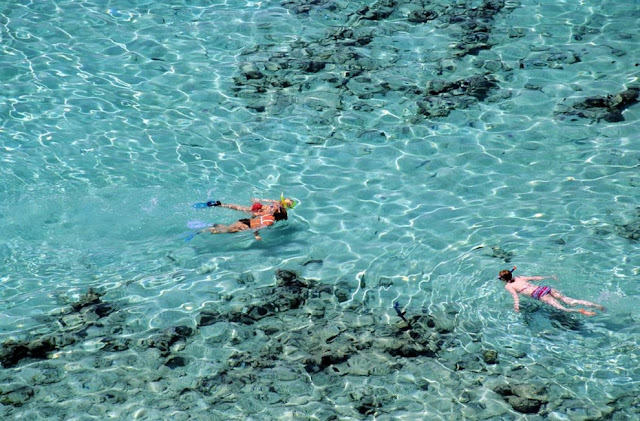 In the Red Sea is home to over a thousand species of invertebrates and 200 different species of corals, in addition, it is the most northern tropical sea. Red Sea - a popular place for divers and lovers of swimming Snorkelling. 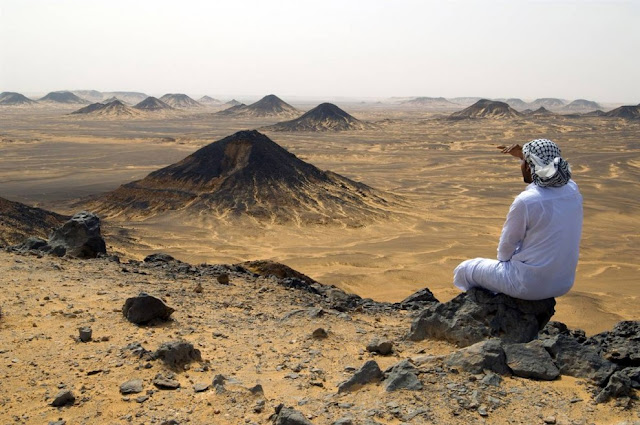 A man admires the view of volcanic peaks of the Black Desert.